Eyebrow Trends Throughout The Decades 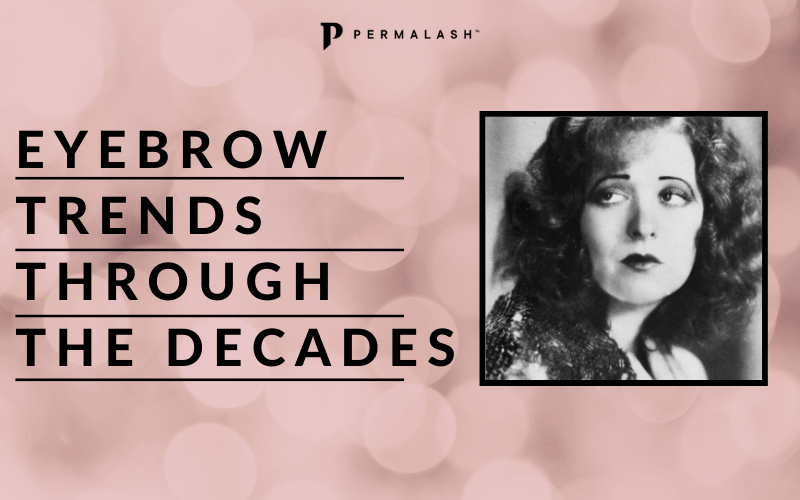 Though they may seem like a minor detail to some, eyebrows have the ability to create a statement and ultimately carry the whole structure of your face on their perfectly placed arches. Throughout the last 100 years, eyebrow trends have continuously evolved and changed as the fashion and eras pass into the next one. In this blog we take a look at eyebrow trends, how they’ve evolved and how the styles we create now have been influenced by the past, bringing a new meaning to ‘brows on fleek’!

The 1920s- The Roaring Twenties is known as one of the most glamorous eras yet. With its flapper girls and Hollywood starlets, it holds a place as one of the most alluring decades to date. For the girls staring in silent films, their eyebrows were very thin, long and drooped down to the outer corner of the eyes. This added to the theatrical drama of the films. Actresses such as Clara Bow and Anna May Wong pencilled in the long drooping tail to achieve this look.

The 1930s- The glamour was still high in the ’30s. The brows still remained pencil-thin, but started to take on a slightly more natural shape and didn’t have the drooped down effect that the 1920s had. They were more rounded and had a more upward bend to them. Merle Oberon was the perfect example of having high arched brows which were a round shape. Billie Holiday filled in her brows to create a bolder look with a darker hue, something Permalash can help you achieve today!

The 1940s- This was the first era where brows started to become more natural and bushier brows started to take its place in the spotlight. Joan Crawford was known for her bolder, heavier eyebrows which in turn inspired other women to stop plucking their brows into the pencil-thin shape they were previously. Her brows had a soft arch and weren’t too overly curved.

The 1950s- The ’50s gave us some of the most famous and beautiful actresses to date. In this era, the likes of Marilyn Monroe and Elizabeth Taylor graced the silver screen, and in turn, created the look of the ’50s. Marilyn Monroe’s brows were defined and had subtly pointed arches. The colour was kept natural to match her bleach blonde hair. Using Permalash you can mix colours to create the perfect blonde/ashy brown shade to achieve a natural-looking colour. Elizabeth Taylor was known for having the most beautiful eyes, and she has the brows to match. Her brows were very bold and thick to match her raven hair, achieved by packing on a dark matte shadow.

The 1960s- The Swinging Sixties saw a growth in a more natural and thicker set of brows. The ‘Hepburn’ effect was created by the woman herself, Audrey Hepburn. Her brows were a full natural shape, with no exaggerated arch or tail. In turn, this inspired the woman of the ’60s to fill in their brows to try and replicate Hepburn’s soft, yet bold look. On the other hand, mod culture was growing in Britain, and the face of fashion in the country was Twiggy. Her brows were thin and rounded to compliment her now-iconic statement liner.

The 1970s- Return of the tweezers! Singers such as Diana Ross and Donna Summer sported a thin brow which was possibly even thinner than the brows of the ’20s. The Make-up of this era was colourful, over the top and vibrant. Plucking or waxing away the majority of the brow allowed for more space to apply the makeup.

1980s- The brow style of the 80s was a polar opposite of the thin style worn in the 70s. Brooke Shields was the front runner of sporting au naturel brows. Seeing a beautiful and successful actress having this kind of style started a spike in women going back to letting their brows be natural and full. Whitney Houston brushed up her brows to give a fluffy and full look.

The 1990s- In a recurring theme, thin brows made a return. Known as the supermodel era, the most famous models were having their brows styled thinly, with Kate Moss being a huge influence. Drew Barrymore was known for having dark thin brows to match the grunge era going on at the time. Our Permalash comes in black, blue/black and brown, perfect if you want to create a look reminiscent of Drew Barrymore’s grungy 90’s style.

The 2000s- The new millennium didn’t come with any major brow changes and the style was still plucked and thin. Although they were thin, they were mainly natural in colour and followed a more natural shape. Cameron Diaz had that fresh girl-next-door look with keeping her brows a natural shade and defined. On the other hand, some took the thin brows to another level, plucking them within an inch of their life. Celebrities like Christina Aguilera carried on the thin brow trend and took it to another level.

The 2010s- With plucked thin brows being the norm, Cara Delevingne shook the beauty and fashion world with her big dark natural bushy brows. She made such a big impact, that to be seen having thin brows became ‘unfashionable’ and women all over the world stopped over plucking the brows in the hope to grow bold brows like Cara did. This decade was also the era of the ‘Instagram brow’. A perfectly filled in, precise, defined, neat and bold brow which became popular with the likes of Kim Kardashian and other beauty influencers became the eyebrow trends of choice for us mere mortals too!

The 2020s- Not much has changed so far in terms of eyebrow trends since the last decade. However, full, fluffy brows are becoming the most popular style and are seen everywhere in fashion and editorial images. There are more and more techniques and treatments around to create the desired full and fluffy brow; microblading, soap brows, brow lamination, and dying your brows have are popular within the beauty industry.

Here at Permalash we predominantly supply and manufacture Permalash Eyebrow and Eyelash tint. We can create a bespoke kit to fit your specific needs by mixing and matching our Permalash products.  To view all the Permalash products we have to offer please visit our shop page, where you will also find more information about the products themselves and the company.

You have Successfully Subscribed!

Shopping cart
There are no products in the cart!
Continue shopping
0